Similar to Denis Lemieux’s search for the owner of the Johnstown Chiefs in Slap Shot, many parents have asked who owns Casco Bay Arena.  The answer is simple:  We all do.

Casco Bay Arena is “owned” by Casco Bay Arena, Inc.–a non-profit corporation with the mission of ensuring that youth hockey is available and accessible to all by strengthening and supporting  Casco Bay Hockey and other non-profit hockey programs.

The Arena is the home of Casco Bay Hockey and is dedicated to its past, present and future players.  Whenever there is a snow day, the Arena opens up for pond hockey.  During college vacations, groups of Casco Bay players come back for pick-up games.  Most importantly, during school vacations and holidays, Try Hockey for Free sessions are open for future players. 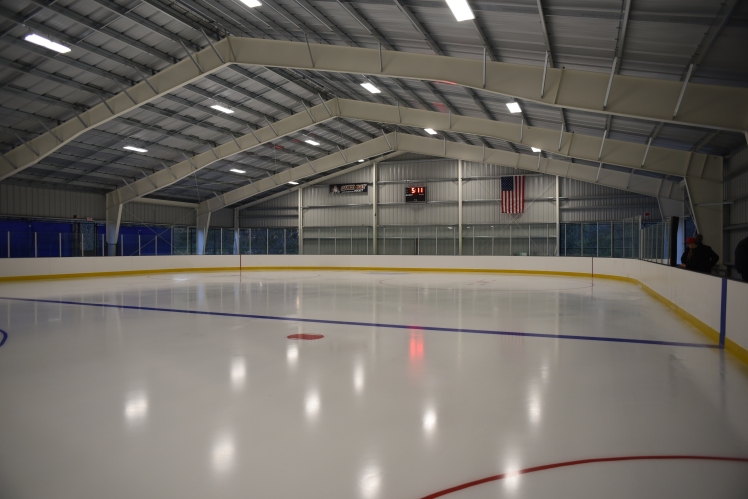 As time moves on, the Arena will be looking for volunteers to ensure its continued success.  In the next week, we will be posting opportunities for parents of younger players to get involved with the Arena.

As part of this transition, Mike Geoghan, Matt Lambert, Scott Matusovich and Eric Turgeon have joined the Casco Bay Arena Board of Directors as we look to the future and seek to strengthen the bond between the Arena and Casco Bay Hockey Association.  Founding Board Members Marco Giancotti, Wes McCauley, Fran Norris,  Mark Tracy will move to the Founders’ Advisory Board.  John Veilleux (President), Tom Marjerison (Vice-President), Sara Kramlich (Treasurer) and Kevin Kaserman will continue to serve on the Board.

Before the Arena was built, this site held the remnants of an old outdoor hockey rink that had fallen into disrepair.  However, over a one-year period, the area was transformed.

Unlike many Arena projects that are underwritten by a large benefactor or institution, the Arena was funded by Casco Bay Hockey and the families of its past and present players who recognized the value of our program.  The names of the Founding Donors are listed on plaques at the Arena.

Due to budget constraints, limited demand for ice time during the shoulder seasons, and our desire to avoid competition with Family Ice Center and Travis Roy Arena, an unconditioned Arena design, similar to the original rinks at Phillips Andover and Holderness, was selected.  This design avoided the need for HVAC systems, which allowed the Arena to be built for approximately half the cost of a conditioned ice rink.  The design also reduced long-term operating costs.

The first game at Casco Bay Arena was held on October 23, 2015 and was officiated by NHL Referee Wes McCauley who was one of the founding members of the Arena’s Board of Directors.

In an age where youth sports are a commodity and often operated on a for-profit basis, we are proud of our boast that the only person getting paid at Casco Bay Arena is the one driving the Zamboni.  All of the people involved in founding and managing the Arena are volunteers who have not only given their time, but also a significant amount of money to make the Arena a reality.

Through a partnership with Family Ice Center, which provides personnel and facility management at the Arena, we have ensured that our ice rates are below market value while also supporting Family Ice in their commitment to youth and high school hockey.

Through hard work and the efforts of our volunteers, Casco Bay Arena has been a success as it begins its fifth season of operation.  We hope that parents of younger players will get involved and take ownership of the Arena in the years to come.  After all, every past, present and future player is an owner of Casco Bay Arena–the home of Casco Bay Hockey.